From WikiApiary, monitoring the MediaWiki universe

Nemo bis mentioned on User_talk:Thingles#mutante.27s_wikistats Pavlo's list of wikis. Rather than deal with the format of this in the mutante list, it's easier to deal with this file directly. 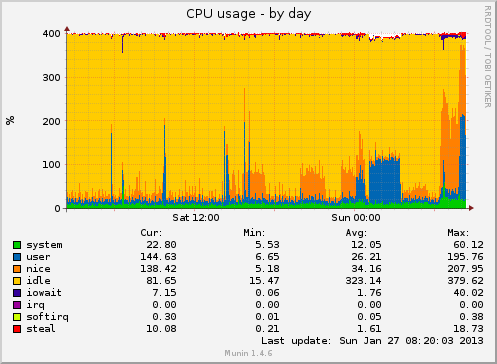 Given the size of this import, I think it makes sense to add a specific category tag to these pages. Suggesting Category:Pavlo import be placed in all these pages. This would especially help with any Replace Text needs or other followup mass actions. Thingles (talk) 03:18, 26 January 2013 (UTC)

This import is going to be messy. As you can see in the debug output, these sites would be imported with Validated false and Active false. It may make sense to just have active false. Since the name of the wiki is retrieved from the API on this import, the API URL is already validated. Thingles (talk) 03:20, 26 January 2013 (UTC) PS - Note Validated=No in the test runs below.

I would import Validated=no since this would help to distinguish if a human eye looked at the page or not. Since Active has to be ticked anyway ... There may probably still be wikis not being activated though they are valid (e. g. Audit Bee or other reasons) --[[kgh]] (talk) 10:05, 26 January 2013 (UTC)

Audit Bee will run this import. Right now he is not checking for any preexisting sites. There could be a query to see if any existing sites have the same API URL being reviewed before importing, but it would slow it down dramatically and I suspect would not hit any matches. Either way, if a site is overwritten the revision history would be able to recover the original. Thingles (talk) 03:23, 26 January 2013 (UTC)

Looking at the file a bit more, this may be needed.

A cheap and cheesy alternative solution would be to check the result of the edit action to the wiki. If it returns a new page was created there is no conflict. If it returns anything else I could flag that page name to be reviewed. This seems workable. Thoughts? A new page will return

It is really hard to know if a language code should be added to the target page names. Not sure how to deal with that, or if it's even worth trying. Thingles (talk) 03:30, 26 January 2013 (UTC)

This should only be done if there is some kind of language farm. However, in this case the page get's overwritten by Audit Bee over and over, telling us a second import with language codes added to the page name should be done. --[[kgh]] (talk) 10:05, 26 January 2013 (UTC)

Nice to see this moving! Note that wikistats' mediawikis list also has some wikis not listed here, and some other noise and duplicates removed. You'll have to check for duplicates later, and/or remove from the lists those that were already reported in wikistats' bugzilla component. --Nemo 14:24, 26 January 2013 (UTC)

I'm going to have Template:Website check to see if it has any duplicates in the wiki. And future importers will need to have better logic to see if they are trying to import something that already exists. This list will give a very wide and diverse base, and really everything WikiApiary needs to insure that all the other related systems will scale up to a larger number of wikis. I'm really excited to run this and fill out the wiki list! Thingles (talk) 15:06, 26 January 2013 (UTC)

Next steps: What do we see needing to change, if anything, before running the entire list into the wiki? I would add a sleep in the bot and then let it run. Probably take about a day to import the entire file. Thoughts? Thingles (talk) 15:04, 26 January 2013 (UTC)